“We’ve been dominant in all three zone, They got some confidence”. That’s how head coach Pete MacArthur describes the last three games for the Thunder headed into the final two games of 2022.

“I just want the Thunder to play hard” Pete MacArthur described to me. “I just want them to shoot pucks, stay in the crease and just stay there. Not take penalties, not go outside the rules of the game, especially whoever were playing, playing them here (Cool Insuring Arena) it’s not going to be fun, you aren’t going to have fun playing against us, it’s not going to be pretty. We’re going to capitalize on every shift”.

It was only a matter of time before Utica’s brass came calling for bodies as the New Jersey Devils recalled forward’s Tyce Thompson and Tyler Wotherspoon from the American Hockey League. Lindy Ruff announced that the Devils have placed defenseman Ryan Graves and John Marino on Injured Reserve with what they are calling “week to week injuries”.

Forward Sebastian Vidmar and defenseman Ivan Chukarov have been recalled to Utica, Friday morning. Thus gives the Comets options after having zero healthy scratches on Wednesday in an OT loss to Rochester on Wednesday. A well deserved call-up for number 22 with six goals and six assists. Chukarov is headed to the Comets on a PTO after spending some time in early October in Utica for training camp.

“You know Jozefek drove eight hours through the night to meet us in Quebec, he played four minutes in that game, played fifteen the next and now arguably our best forward so when I was playing I never liked it when guys would get called up and sent down, that’s not what it’s for. So us that you can play. You are going to show us that you can play. They did a good job with it, I’m sure that they feel good about it”.

A busy week continues for the Adirondack Thunder as they close out 2022 with a pair home games this weekend against Worcester on Friday night at 7:00pm and Trois-Rivières on Saturday for their annual New Years Eve game with a special puck drop at 5:00pm. It’s their third matchup against the Lions this week.

“We had to get fresh faces in, we always look for them, obviously it’s my first time doing this so I don’t wanna make moves, when you aren’t sure you know? So we’re going to try and give them (Travis Broughman & Brady Flurent) opportunities, especially the young guys in pro hockey it’s not easy, but when they became available and we’re willing to come we brought them and they played well on Friday along with getting Grasso back from the American League, they have a lot of confidence and that filters through the group, it’s kind of a perfect storm and it worked out”.

The Thunder picked up their second road win on Tuesday night after Colin Long’s 3rd goal against the Lions this season, followed by Ryan Smith’s two goals. Number nine continues to torch Trois-Rivières with three goals and four assists this year against the Lions. Smith has three goals and one assist in his last three games. Colin Long is heating up on the scoring sheet with 4 points (2G, 2A) in his last five contests.

Adirondack hit the ice for a morning pre-game light skate at 10:00am after getting back into Glens Falls late last night splitting their road-trip on Tuesday and Thursday going 1-1-0-0. Glenn Merkosky was out on the ice with the Thunder this morning ahead of their second matchup against Worcester in a full week.

“We tweaked a couple things in practice, maybe that changed their mentality a little bit but they (Thunder) have just been playing with confidence, they looked quicker, especially moving the puck tape to tape, you kinda felt the last few games coming out of our zone, we’ve had full control of the puck, and when we played well earlier in the year, that’s how we’ve looked”. MacArthur talking about the recent Thunder stretch of going 2-1 in their last three games.

Xavier Parent leads Adirondack against the Railers with four goals this season and in his last five games has three goals and four assists. Parent in his last three games has been paired with Grant Jozefek and Travis Broughman along side Brady Fleurent.

“That’s the plan before they came, we’re going to be everyone a realistic look, not just one game. I wanna see if you guys can play and help our team and also it makes other guys perk their ears up, and see guys coming up from the SPHL and playing well, kinda like oh, okay I better get on my horse here or maybe I won’t be in the lineup, and that’s just the nature of the beast and we had 21 and counting games to figure it out and we’ve got a whole lot more to figure out so if you wanna play, you better play.

MacArthur was quickly to praise the play of Ryan Da Silva in the last five games or so. 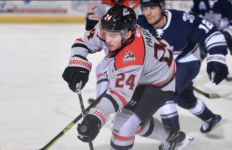