The Adirondack Thunder begin their three-game home stand at the Cool Insuring Arena starting Friday night. The Worcester Railers are their first of two opponents for this weekend and then take on the Greenville Swamp Rabbits for the first time since October 25th 2017, Adirondack’s first time hosting Greenville since November 29th 2015 at home. The Thunder look to build after picking up three out of four points since the weekend in Trois-Rivières.

“You can look at our record, but it’s often one or two mistakes that blow up a game. That’s what we did our first four or five games,” MacArthur added going into this weekend.

Colin Long had four points (1g-3a) in two games on the road last weekend. Meanwhile the Thunder despite their 1-4-1-0 start have scored eight of their 17 goals in the first frame. Adirondack was also able to score first for the first time this past season last weekend. Entering tonight Worcester’s Jacob Hayhurst has a hot stick with a three-game goal streak with four. Adirondack’s captain Shane Harper owns Worcester in the point department with five points. (1g-4a). The Railers who are yet to be unbeaten, who are 9-0-0-0 have outscored their opponents 18-7 in the first period. Lastly the Thunder are tied for the league lead with three shorthanded goals.

“Saturday, we just played within our structure and capitalized on our opportunities, We need to do the same thing against Worcester this weekend as we did against make it hard on Worcester and stay within our system. How bad are you willing to battle for the puck and back check?”

When it comes to Worcester, MacArthur said that it reminds him a lot of the Manchester Monarchs when he was captain of the team he now coaches.

“They’re highly skilled, they play fast and they like to find your weak side”.

It looks like it’ll be the season debut for veteran and South Glens Falls native Shawn Weller has he was activated from reserve yesterday.

How to Watch and Listen: Tonight’s 7:00 P.M puck-drop will be on Flo-Hockey TV and on Hits 95.9 on the radio, online or exclusively on the app. Broadcaster Rob Lippolis will be live at 6:45pm from the Dave Strader press box before puck-drop for the pre-game show.

On Friday night the Worcester Railers (9-0-0-0) are on the road for the weekend for a two game swing against the Thunder before returning home to take on the Reading Royals at the DCU Center on Wednesday. Blade Jenkins and Collin Adams lead the way for the Railers with ten points in the nine victories that Worcester has been able to achieve. As things stand for right now the team will be with out Ryan MacKinnon and Trevor Cosgrove for now as the two defenseman were recalled to Bridgeport on Tuesday and Wednesday of this past week. Sure, there’s a chance that they could return to the ECHL by this weekend, if not that’s to big pieces to fill in the back-end for HC Jordan Smotherman.

Adirondack will be without one of their “A’s” this weekend after Taylor will be out with an injury hence the trade for veteran defenseman Matt Steif and signing of Brandon Fehd and Wayne Letourneau.

“It makes us more assertive on defense and gives us a little more experience back there, With Taylor out, Stief can come in and get some of the pucks that Taylor would get”.

With the call-up’s of MacKinnon and Cosgrove, Worcester has activated Nolan Vesey and Brent Beaudoin from reserve.

Jozefek, 25, played 14 games for Worcester last season, earning one goal and three assists. This weekend, he will face Worcester, his previous squad. The Chester, New Jersey native played five seasons at Northeastern University, where he finished as the assistant captain, before beginning his professional career. He recorded 76 points in 134 games, including 29 goals and 47 assists for a Hockey East championship-winning season.

“A guy like Grant Jozefek is looking at a decent role this weekend, We’ll move better from the back and we’ll manage the puck better. It’s the system within the system.”

Fehd, 31, joins the Thunder after playing in 17 games for HC Vita Hästen during the 2021–22 international season. The Gilbert, Arizona native has three goals and 19 assists from the blue line for 22 points and 116 penalty minutes in 137 ECHL games with Rapid City, Indy, and Utah.

“Fehd’s got 130 games in the ECHL, Stief played almost 60 games on a playoff team in Idaho last year”,MacArthur said.

Joseph 28, After playing in two games for the Toronto Marlies in the 2021–22 season, Joseph joins the Thunder. The 28-year-old won his first game for the Marlies by stopping 34 of 37 shots he faced. The native of Sherwood Park, Alberta, competed in five seasons of collegiate sports for Trinity Western University and Nipissing University.

The 26-year-old Stief participated in 54 games with the Idaho Steelheads last season, recording 18 assists and 18 minutes in penalties. The Boca Raton, Florida-born player played 133 games over four seasons at Canisius College, tallying five goals and 55 assists for a total of 60 points. Stief scored 26 points in 36 games while serving as the team’s assistant captain during his senior year.

“These guys aren’t green, they’ve gained confidence playing at this level. Even Letourneau looks good — last weekend was his first ECHL experience; he had one assist and they should’ve given him two.”

The Thunder have released forward Rex Moe, defenseman Cory Dennis and are without goalie Issac Poulter after he was recalled to Utica due to injury to Mackenzie Blackwood in New Jersey.

When it comes to tonight’s game and on the weekend: Coach Pete MacArthur added the following:

“We have to keep the puck, make them play defense, and those guys who like to freewheel around will get frustrated, they’ll get tired and they’ll be less effective, It takes a total commitment from our guys to understand the chess match we’re going to be in.”. 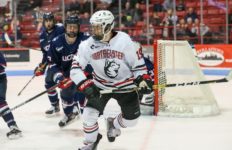 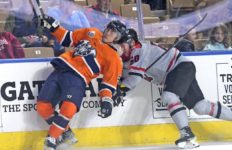 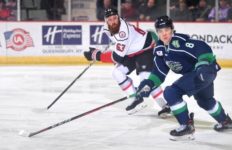